Hello NY rabbit and cavy breeders! My name is Steven Buell. I have been showing rabbits since the spring of 2004, when I was showing in youth. During that time I have held office in the National Jersey Wooly Rabbit club and North Country R&CBA. I have also helped start a breed specialty club along with an all breed club. I have had my rabbit judges license since the end of 2012. I try to be as active as I can hosting shows that are fun for all. I am also a very big advocate for the equality of cavies. 2 big goals of mine than I am currently focused on are bringing a convention back to the north east and applying for the COD for chocolate agouti Jersey Woolies. I truly appreciate that the membership has entrusted me with the position of President of the NYR&CBA. I look forward to serving you all! 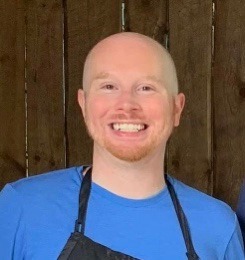 How often as rabbit breeders do we get asked “What?” “Why?” Rabbits?” How many?!” LOL.
I got my first rabbit Louie, a French lop of course, in 1983 when I was 13 years old. At that time I only showed with 4-H. I got out of rabbits in high school, in time to attend college. Fast forward several years and thanks to the internet, I was able to connect with other breeders and travel to Ohio so I could once again own my beloved French lops. Since that time I have worked tirelessly to create a herd that I am proud of. I had the honor of winning best of breed at the 2017 and 2018 conventions. Best opposite at the 2013 National and best at the 2018 National which was particularly special as it was the national in Syracuse that our NY State Club hosted.

I am active on the state level in multiple clubs. I have previously served on the National Lop Club’s Standards Committee, and I am on the current working COD for Otter French Lops. I am also a member of the Empire polish Club and the American Polish Rabbit Club. Most recently I have begun the process of obtaining my registrars credentials.

I have judged Showmanship with the youth in Niagara, Steuben and Ontario counties multiple times. I love working with youth; as they say, they are indeed our future. I have enjoyed the opportunity over the years of mentoring some and providing them with some tremendous stock to work with. Most recently I have enjoyed getting to know more about the world of Cavy exhibitors and I look forward to getting to know and working with them.

For those of us with this particular passion, we know it is so much more than rabbits & cavies. Through this hobby I have met some of the most incredible people, I have made the best friends of my life. I have laughed, oh, how I have laughed. I have traveled our country and made memories to last a lifetime. But most of all, this hobby and it’s members saved me. In my darkest time, the need to care for the rabbits is what made me get up each day. Their quiet acceptance, need for head rubs and the constant reaching out of my rabbit family carried me through. I could go on and on in regards to how Incredible and Priceless this hobby and it’s people are to me.

To me, successful shows consist of friendly competition, good sportsmanship and comradery. As your Vice President, I hope that my levelheadedness, professionalism, experience, maturity and empathy are qualities that will serve you well. 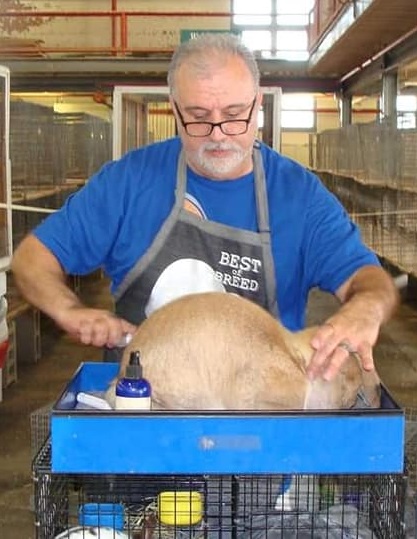 “I truly enjoy our rabbit “hobby” and look forward to many more years of helping put NYRCBA on the road to being recognized as a strong reputable State of rabbit breeders! If you should have any questions please feel free to e-mail me!”

Debbie became involved with rabbits 17 years ago when her son David decided he wanted a pet. One thing led to another and before she knew it she had over 200 Rabbits! Her rabbitry became USDA licensed in 1990. She dealt mostly with pet shops until 1991 when she and her son decided to start showing with the encouragement of a great friend by the name of Dick Kuehnle. “He convinced me at the NY State Fair one year that the Satin I was showing was not as good as I thought and approached a few Satin Breeders to get me going in the right direction!” Debbie then started showing Satins while David showed Dutch. David eventually tired of the rabbits but Debbie continued with her favorite breed of Satins. Over the years she has won over 100 Best of Breeds and 12 Best In Shows. Debbie became Secretary of the NYRCBA in 1997 and was nominated “Person Of The Year”. She was given an award from the NY State Fair Old Timers Club in 1998, which she deeply cherishes. In addition to holding the office of Secretary, she is also treasurer of the Empire State RBA, Secretary of the NYS Satin Club, Secretary of the NY Rabbit & Cavy Convention Shows club, and a Charter member of the Central New York club. Debbie is an ARBA Registrar and judge. She generously volunteers her time to secretary many New York State shows.

I participated in 4H from the age of 5 until I aged out at age 18. However, after aging out I immediately became a 4H volunteer. I have participated in almost every category of 4H, I represented my county on many trips, and I was the Youth Representative on my county’s 4H Program Committee for 4 years until I aged out of 4H. I have been teaching a Rabbit Class at my county’s Cooperative Extension office about every 2 weeks for 5 years now and plan to continue with the classes. Many of my 4Hers who I teach in these classes have not only joined clubs and NYS Rabbit and Cavy Breeders Association but also ARBA and their breed’s national clubs as well. I also teach 4H Shooting Sports in my county where I am a certified Rifle and Archery instructor, as well as many other animal classes. I have been working at 4H Camp Shankitunk for 4 years now, ever since I was of age to be a counselor. I am also the Counselor in Charge of Science, and Shooting Sports classes as well as a Unit Leader. I also taught First and Second Grade Religious Education Classes at my Church for a couple years.

When I was a youth I competed every year in the Royalty Contest at Grand Finals where I won Duchess as well as Queen a few years. I did compete twice on the NYS team for the 2008Kentucky Convention and then again at the 2011Indiana Convention where my team placed 3rd overall for Judging.

I also participated once in the American Netherland Dwarf Rabbit Club’s Royalty contest at Nationals in 2010 where I won the Queen division. After winning the ANDRC contest once I decided that instead of competing again I would help other youth study for the contests and in 2011 at the Pennsylvania Dwarf Nationals I helped run the Royalty contests as well as judged a portion of it.

I also helped run, and grade the Royalty Contest at the 2012 Dutch Nationals also held in Pennsylvania. Currently I am enrolled in College at the State University of New York College of Agriculture and Technology at Cobleskill.

I have an Associates in Animal Industry and am currently working on my Bachelors Degree for Animal Science with a concentration in Canine. At college I have been a Teachers Assistant for a couple of classes including a 300 level Domestic Animal Behavior class as well as a Tackless Horse Training Class. I was also asked to teach a few classes on rabbit care, diseases, breeds, purposes and genetics in my Small Animal Management class. This semester I am being inducted into the National Honors Society for Professionals in Technology branch at my College. I did get my start in rabbits through 4H, which from that escalated to the next level.

I enjoy working with youth, where my goal is to provide them with the same opportunities that I was given when I was a youth. Without all the opportunities I was given and the mentors who guided me, I would not be where I am today. I believe it is time that I gave something back to the youth. I am very excited and am looking forward to helping out with the youth this year.

Hello everyone. The NYR&CBA Website is available to Member Clubs of the association to post their show catalogs & show dates. Show dates must be approved by Delegates at our annual Fall Meeting for upcoming years. Please feel free to contact me if your club needs help with Catalog updates. Thank you!